TotallyWrite is a toolkit for writers that assists in the planning and mapping of screenplays.

The existing TotallyWrite software was Windows-only and was difficult for users to install and configure.

Why use a database application for what is essentially a word processing application? Turns out, it was a good choice. 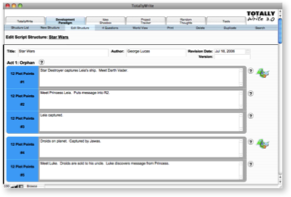 Create a cross-platform version and improve the usability.

TotallyWrite was created by award-winning Canadian screenwriter Jeffrey Schechter. The software is used to construct plot and character structures for movie or television scripts.

The previous version, TotallyWrite Version 2.0, was a Microsoft Windows-only application based on Microsoft's .Net platform. This created two problems; missing out on the Macintosh market, which is widely used in the creative field and the Windows-only .Net framework required users to download and install additional software before TotallyWrite could be installed. This lead to frustration amongst new users who may not be tech savvy.

Schecter has developed a process for creating screenplays so TotallyWrite had an existing data structure and defined workflow. This meant not having to spent a great deal of time on the background structure of the program. We could focus more time on the interface, usability and streamlining the workflow for users.

The TotallyWrite workflow is divided into several sections; making a tabbed interface in FileMaker Pro a logical choice. We did not want to overload the writer with too much detail at any time.

The interface was intentionally kept minimal and low-key so not to distract from the writing.

On startup TotallyWrite 3.0 automatically checks to see if there were any updates to the program available. 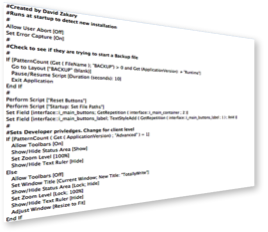 The biggest issue encountered was dealing with legacy concerns. The file format which was created for TotalyWrite 2.0 was a poorly formed XML file. We had to devise a way to import a poorly structured file and then extract text and build a structure from it. This required writing code that could hunt through the text, looking for key words that may, or may not exist, and then move the data into the proper location in TotallyWrite 3.0

The project was completed in under 3 months and sent out to a select group of users for testing. Feedback was returned and some additional features were added along with bugs being fixed.

Proper installers were created for both Windows and Macintosh users so that the program could easily be installed without additional downloads or the need for user interaction beyond clicking "install".

TotallyWrite was being distributed to an audience where we had no control over what kind of computer the software would be run on. We had to make sure that TotallyWrite 3.0 was as bulletproof as possible. We did not want to bother the users with multiple small updates. This meant a higher level of testing and error checking compared to an internally used database application where we could easily make changes to the code if necessary. We had to test against multiple versions of Windows and the Mac OS along with other computer settings such as screen resolution, hard drive space and available memory.

The need for dealing with legacy versions of the program was the most problematic. The poorly formed XML data from the previous version of TotallyWrite required a huge effort in programming. If we had a complete and properly formed XML document to work with the problems would have been considerably less. The format of the XML meant stepping through each line of the file and extracting portions of it. The incompleteness of the file meant that the parsing of the file might or might not return results. The coding had to take both successful text extractions and failures into account. This lead to better and more modular code writing; improving the efficiency and quality of the product and future projects.

In late 2008 Mariner Software, a publisher of many Macintosh and Windows-based software titles, purchased control of TotallyWrite from Jeffery Schechter and rebranded it under the name Contour. Contour retains many of the features present in TotallyWrite 3.0. They restructured the FileMaker Pro database into an application that ties in with their other writing-oriented titles.

I guess they saw something they liked.


We were immediately intrigued by TW3 (Contour) when Jeff brought it to our attention. As we grew more familiar with it, it appeared to be a nice fit in the "stages" of how to write a script. We already had a screenwriting app and Contour brought to the table a solution for writers to flesh out their ideas in a proven system. As we move forward, Montage and Contour will become more tightly integrated and, ultimately the ideal solution for writers of every ilk.

Need more information? Contact A Poke In The Brain today